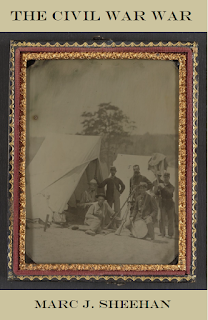 Part George Saunders and part Borges but wholly in and of itself his own, Marc Sheehan's The Civil War War is daring, inventive, startling--and so prescient and prophetic it feels like the vivid soul print of America now in its ragged and torn state but somehow as it has always been. Somehow this small but searing book speaks to the tragic fact that America is still at war with itself even as this brilliant work offers a kind of miraculous healing through the power of art, truth, humor, and compassion.

—Robert Vivian, author of All I Feel Is Rivers: Dervish Essays

Marc J. Sheehan is the author of two full-length poetry collections, along with two chapbooks of poetry and one of flash fiction. His short story “Objet du Desir” won the Stella Kupferberg Memorial Short Story Contest sponsored by the public radio program Selected Shorts.  His story “The Dauphin” was broadcast on Weekend All Things Considered as part of its Three-Minute  Fiction  series.  He  has stories, poems, essays and reviews in many literary magazines including Paris Review, Prairie Schooner, Pank, and Michigan Quarterly Review.  He lives in Grand Haven, Michigan.

Posted by Paper Nautilus at 6:22 AM